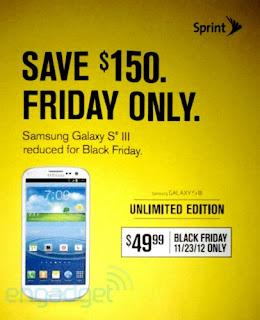 Well Black Friday is coming soon and as you may know Black Friday has shifted gears from being all about the best deals on computers big televisions, to deals on the best smart phone. Early yesterday morning, the Black Friday Ad was leaked. According to the ad the Samsung Galaxy S III will be selling for an amazing $49.99 which is a huge drop from its regular price - $199.99. So if you are eligeble for an upgrade anytime around Black Friday, or better yet on Black Friday I suggest you wait and upgrade for this amazing Samsung Galaxy. That way you save some money and you have a lot of time to shop after you upgrade your new phone. 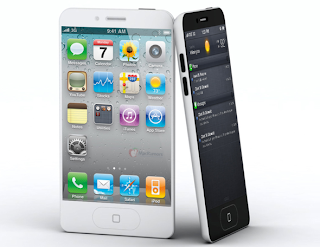 Rumor on the web has it that, Apple will be holding a media event on September 12th to introduce the New iPhone. It was previously rumored that the launch event would include details about the iPad Mini, iOS 6, and New Generation of iPod's; however it looks like the iPhone will be the only thing released on the launch event.. Apple has decided to tighten up the schedule with pre-orders beginning on the same day, so expect big lines in front of the Apple stores and the local Best Buy stores (who will also be allowing pre orders). Also stay tuned because these are just rumors and the new generation iPods can really come out. In fact many people believe that since major retail store are pretty much out of stock on all, but the iPod touch iPods, there will be a new generation that rolls out soon after or on the same day the iPhone 5 rolls out.

The release date of the iPhone 5 is set to release on September, 21st. There is a second shipment for regular orders set for October 5th. So if you're one of the people who wants first hands on the device, mark your calendars for the pre-order date of September 12th. However, if you are one of the people who doesn't want the latest and the greatest you can save your money for about a month or two before it is officially out and you can see all the reviews on it an then purchase it. Note that with new iPhones, they usually run out within the first 1-2 months and then they pick back up once Apple is able to keep up with the demand of the phones.

The prices for the iPhone 5 are expected to be the same to those of the iPhone 4S (which to me speaks and let's me know that the improvements inside of the actual iPhone would be pretty much little to none because there were major improvements the prices would have gone up and people would have paid it just because it is an Apple iPhone 5 and the newest device from Apple): $199, $299 and $399 for the 16GB, 32GB, and 64GB models, respectively. If you already have an older iPhone model, look into some money saving tips by taking advantage of Apple’s Reuse & Recycling Program or using programs like Best Buy's Trade-in Program that usually gives you a lot of money back as well. I will keep you updated on the best deals for iPhone 5.